Never let your guard down: Like Amalek, our addiction is cunning and powerful, it is always there, lying in wait,  relentlessly hoping for a moment of weakness.

In this week’s parsha, we learn never to forgive and never forget Amalek:

Remember what the Amalekites did to you along the way when you came out of Egypt. When you were weary and worn out, they met you on your journey and attacked all who were lagging behind; they had no fear of God. When the Lord your God gives you rest from all the enemies around you in the land He is giving you to possess as an inheritance, you shall blot out the name of Amalek from under the heaven. Do not forget.  (Deut. 25:17-19)

What is it about the Amalekites that causes us to be taught to blot out their name from under the heaven.  And how can we never forget a name which we are told to blot out?   What makes this direction more confusing is another passage from this week’s Parsha:

Both the Edomites and the Amalekites are descended from Esau, Jacob’s brother.[1]  Amalek is Esau’s grandson.[2]  Why do we treat these two cousins so differently?

The back story is this: shortly after being freed from slavery and defeating of Pharaoh’s troops at the Sea of Reeds, the people of Israel travel through the dessert on the way to their moment of destiny at Mt. Sinai. Seemingly without provocation, Amalek attacked Israel, and a pitched battle takes place, earlier described in Exodus 17:8-10.  Israel’s victory occurs in a most peculiar way:  With Joshua leading the troops on the battlefield, Moses stands high above  holding up the God’s rod which earlier split the Sea of Reeds and later struck a rock to provide water to a thirsty people.   While Moses holds the rod high, Israel prevails, but when he becomes tired and his hands fall, Amalek prevails.  Seeing Moses’s hand fall, Aaron and Hur lift Moses’s hands for an entire day of battle, and Israel defeats Amalak.

When you were weary and worn out, they met you on your journey and attacked all who were lagging behind; they had no fear of God.

Early in my recovery from addiction, a friend said that my addict was like the devil who is always whispering in my ear.  No matter how well I was doing, those urges were there and just waiting for the moment when I was unguarded.    As it is described in the Big Book of Alcoholics Anonymous, our addiction is “cunning powerful and baffling”.[3] 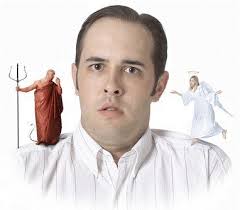 God’s rod, held in Moses’s hand, was able to be decisive in  the battle, but Moses could not do it all himself.  He needed others to help carry the load. So, too, we can’t live in Recovery alone and without God’s help.  We need both a Higher Power and friends to keep ourselves focused on the path towards wholeness. The tools are there, but cannot work in isolation.

In Jewish tradition, we recognize two parts of human nature “Yetzer HaTov” and “Yetzer HaRa” – the good inclination and the evil inclination.  Yetzer HaTov represents the best parts of our unselfish nature, while Yetzer HaRa is the animalistic and instinctive nature of our beings.  Yetzer HaRa is not a demonic force that pushes a person to do evil, but rather a drive toward pleasure or property or security, which if left unlimited, can lead to evil (cf. Genesis Rabbah 9:7)

So why are we taught to deal with our two cousins, Edom and Amalek so differently?

We treat Amalek as an nonredeemable force that is evil and will always be evil.  Amalek did not have any particular quarrel with Israel, but is seen as acting totally out of malicious intent.  Amalak is the addict within us. It is unredeemable and we must always be on guard for this cunning enemy. In essence, Amalek is our Yetzer HaRa unconstrained and run amok.

Not all enemies are Amalek.  We can understand other forces which have been aligned against us with a more discerning eye.   We are taught in Step 9 of Alcoholics Anonymous to make amends to those whom we have harmed.[4]  This is illustrated in the path that Jacob and Esau traveled.  After Jacob “stole” Esau’s blessing as the first born, he fled in fear of his older brother, as Esau had vowed to kill Jacob.  But when Jacob returned, he overcame his fears and his guilt. But when Jacob met Esau on the plain, they reconciled: Esau ran to Jacob and embraced him. Jacob said to Esau, “Truly to see your face is like seeing the face of God” (Gen. 33:10).  This is why we are taught not to hate our brother, the Edomite.

Rabbi Lord Jonathan Sacks reconciles these teachings as follows: Do not forget the past but do not be held captive by it. Be willing to fight your enemies but never allow yourself to be defined by them or become like them. Learn to love and forgive. Acknowledge the evil men do, but stay focused on the good that is in our power to do. Only thus do we raise the moral sights of humankind and help redeem the world we share.[5]

[1] “Two nations are in your womb, and two peoples from within you will be separated; one people will be stronger than the other, and the elder will serve the younger” (Gen. 25:23).

[3] “Remember that we deal with alcohol—cunning, baffling, powerful! Without help it is

[4] “Made direct amends to such people wherever possible, except when to do so would injure them or others.”