It didn’t seem like that major a problem at first.  Maybe I figured I could handle the situation myself.  Perhaps I wanted to avoid looking at what was really happening. Likely I was afraid to know what was really going on. 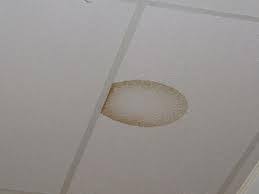 Initially, there was a little brown spot on a single white ceiling tile in my office. It just appeared one day after a heavy Spring rain. It really was not noticeable if you didn’t look directly at that area.  I went to the storage closet, picked up a new ceiling tile and replaced the stained tile with a clean one.  Problem solved.

A couple of weeks later, there was another heavy rain and stains appeared on three or four tiles in my office, and on one tile in another office on the same side of the building.  It was a little less unnoticeable; but, really, who looks at ceiling tiles when they come to my office? Nevertheless, I remembered that this had happened a few years ago, and what we did to fix the problem.  I went on the roof and saw that a downspout had clogged on the side of the building above my office.  There was a nice sized puddle of standing water which had gathered after the last heavy storm.  I left the roof and found some old sneakers and gym shorts in my car.  Thank goodness there is always junk in my trunk — again proving my mess has a purpose!!

I waded through the water, cleared the drain and a couple of hours later the roof was dry.  I went back to the closet, took out some more ceiling tiles and all looked perfect.  Problem solved.

Months later, the seasons had changed and a heavy snow coated the roof.  When the snow melted, stains appeared on three offices on my side of the building.  I knew I needed some help, so I called my buddy, Albert, who is a handyman.  He has done some drywall and painting in the building and was willing to come over and survey the problem.  First, we cleared out the drain and the large pool of water slowly disappeared.  He said that probably would be enough to fix the problem.  At least until the next heavy rain.  He suggested that I proactively clear the drain spout before the next rain so that water could flow from the roof without becoming a problem.  That made sense.  Problem solved, I thought.

Then Albert asked a question:   How did the water get from the roof, into the building?  We needed to find where water was able to penetrate the supposedly impenetrable roof.  The clogged drain which caused the pool of water was not the real problem.   There must be a hole in the roof itself or where the flashing had pulled away from the roof or the building surface.

When we purchased the building, it had an old roof, which we patched from time to time hoping that it would keep the building dry. A new roof could cost $20,000 or more, and was not in our budget. Once again, Albert applied some black goop to a few areas on the roof surface and to the flashing, making sure that there were no obvious places where water could leak into the building.  I made out a check for $250.00 to Albert’s company, ESW Enterprises, feeling giddy that I had dodged another bullet.  Problem solved, once again.

There was another problem which neither Albert nor I considered.

The next spring came with heavy rains.  And the ceiling tiles again stained with evidence of a leaky roof.  I changed into my shorts and sneakers and went up to the roof to clear the drain.  There was a huge lake on the roof, larger than I had ever encountered. But to my surprise, the drain spouts were clear, but the water could not reach the drain spouts.  When I called Albert to describe the problem, he said he could not help and that I needed to call a specialist. 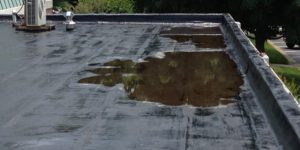 I called Berezovsky Construction, and Sam Berezovsky, the founder’s grandson, came to survey the situation.  He was brutally frank in assessing the situation. The constant water penetration over the years had destroyed the wood supporting the roof.  The lake of water resulted as the wood under the roof began to collapse.  There was only one way to proceed: we needed to completely tear down the foundation of the roof and rebuild it with a new foundation. The half measures of repeatedly patching the surface availed us nothing.

I thought about the roof as I read this week’s double Torah portion, Nitsavim VaYelekh, where we learn that God’s teachings are:

We also read my favorite passage in the Torah: I have set before you life and death, blessing and curse.  Choose life, so that you and your offspring will live. Deut. 30:19.

So exactly how do we do we“choose life”?

This time of year, we are first charged with undertaking Heshbon HaNefesh, a frank and likely painful evaluation of ourselves and our actions.  This is identical to Step Four of Alcoholics Anonymous, where “a searching and fearless moral inventory of ourselves” is taken.  We then engage in Tishuvah, identifying whom we have harmed, and making amends where possible, as taught in Steps 8 and 9 in the AA program. For me, it can be painful to look at my actions, see where I have missed the mark, and then take action to remedy my shortfalls.  And like the way I approached the leaky roof, there are “easier and softer ways” to Hesbon HaNefesh and Teshuvah.  This approach is doomed to fail.

In evaluating our spiritual homes, modern Hassidic teacher Rabbi Shalom Noach Berezovsky warned of a person “who is building an elaborate house on a foundation of rubble” Netivot Shalom, Teshuvah 9:1. As Rabbi Shai Held notes in his new book, The Heart of Torah,

If we are unwilling to invest the money and effort required to rebuild a solid foundation, the building will be unstable, and cracks will appear again and again.  Time and again we will spend money on fixing the latest crack, but these repeated investments will accomplish nothing because more cracks will inevitably emerge.

Again, half measures will avail us nothing. Rabbi Berezovsky teaches we must “have the courage to destroy the whole structure of the house and to dig deep and strong foundations.”  I have been hearing this message for years but these words have not penetrated my being.   If the message is not concealed from me, and is not far away, again I ask exactly what do I need to do to “choose life”?  The parsha say it is “very close to you, in your mouth and in heart so you can fulfill it.”  Where is it?  What steps must I take?

The answer is found in How It Works, read daily in thousands of recovery meetings around the world

“Without help it is too much for us.  But there is One who has all power—that One is God.  May you find Him now! Half measures availed us nothing.  We stood at the turning point.  We asked His protection and care with complete abandon.”

Teshuvah literally means “to turn or to return.”  I think it is no coincidence that How It Works suggests “We stood at the turning point”.   The prophet Zechariah suggests a conversation in which HaShem says: “Turn to Me and I will return to you” (Zech. 1:3). Like my roof, perhaps I didn’t really want to know what was going on, was afraid to face things, and thought I could deal with the situation by myself.   Ignorance did not make these problems go away; neither did the “quick fixes” because more problems inevitably appeared. As Rabbi Berezovsky teaches,  I need to completely tear down the whole structure of my spiritual house and to dig a deep and strong foundation.  I will put Your words in my mouth and in my heart, and I will return to You, asking Your protection with complete abandon.

With warm wishes for a Happy and Sweet New Year.

1,045 thoughts on “Recovery Parsha Nitzavim: How Not to Fix A Leaky Roof”